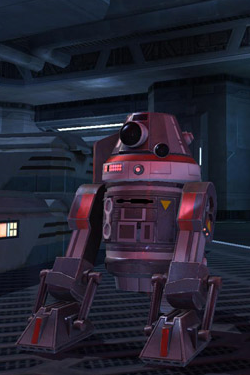 Though the might of the Imperial military is impressive, many would argue that the true strength of the Empire lies in its flexibility and efficiency. The X2-C3 exemplifies the advanced technology the Empire has developed, and never ceases to surprise colleagues with its versatility and its ability to adapt new skills to match even the most obscure of circumstances. Imperial Engineers imbued the X2 line with the most advanced sensor array ever developed. These astromechs are capable of detecting, recording, and analyzing subtle stimuli to determine the strength of enemy firepower, and in some cases, they are even capable of analyzing voice patterns to determine the truthfulness of an informant's statements. Combine these advances with their unrivaled ability to splice security and computer systems, and it's easy to see why many consider the X2-C3 to be the most useful machine in the galaxy.

Because of their usefulness, X2's are deployed to virtually every major Imperial military installation in the galaxy, and no Imperial starships would be allowed to fly without one. Though they are not front-line fighters, Imperial Astromechs are optimized for combat. Like most other Imperial droids, they come equipped with standard blaster-attachments and a variety of other specialized armaments which have consistently proven they can be just as versatile on the battlefield as they are off the battlefield.