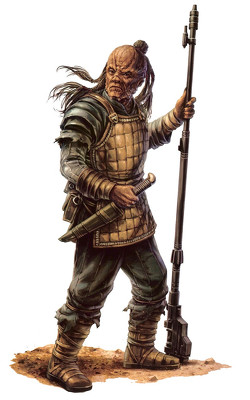 Weequay are a sentient species.

The Weequay are a humanoid race native of the planet Sriluur, in the Outer Rim. Weequays have thick, leathery skin, usually very rough, wrinkled and tanned due to the harsh environment of their native desert planet.

The most distinctive trait of the Weequay species is their primary form of communication. They mostly communicate with pheromones, and while it is obvious that this unique form of language cannot be understood by other species, every Weequay clan has its own code, making pheromonal communication impossible for a Weequay even outside his clan. Since they rarely talk, let alone speaking whole sentences, they were considered inferior and unintelligent by most species for a long time.

Another important tradition among the Weequays, in particular the male ones, is to tie their hair into braids. They then grow one braid for each Sriluurian year spent away from their native planet, as a tribute to their original home, and shave said braids once returned. The female Weequays, on the other hand, do not follow this tradition.

Their polytheist religion is complex. Their main god is the moon-deity Quay, in fact, the very name of the species means "Follower of Quay". Some of the most zealous Weequays also perform ritual sacrifices in his honor, which sometimes turn into real murders.