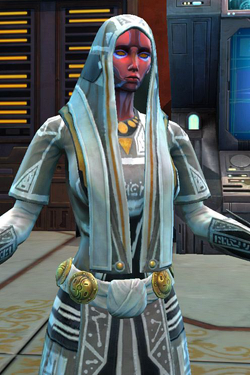 This article is for the species Voss. For the planet, see Voss.

Voss are a sentient species from the planet Voss. They live in a city on top of a mountain, and have the Force-wielding Voss Mystics among their ranks.

They have a small population, vastly outnumbered by their fellow inhabitants, the Gormak, who see them as an aberration. For years they have fended off constant assaults from the Gormak. Following the Great Galactic War, the Sith Empire attempted to invade Voss. The Republic tried to prevent this by occupying the planet, but the Voss Mystics were able to fend off both assaults with the aid of their Force visions. Following the battle, both the Republic and the Empire established embassies in Voss-Ka to earn the support of the Voss.