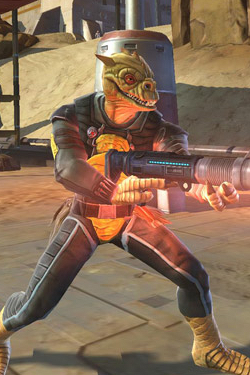 Hailing from a harsh world in the Kashyyyk system, Trandoshans have been in conflict with the Wookiees ever since the two species came into contact. Joining the Galactic Republic first, the Trandoshans actually negotiated with Czerka Corporation for the right to enslave their furry neighbors, but they have never been able to capture more than a few at a time, because the Wookiees are more than capable of defending their homeworld.

Due to the legacy of their homeworld, however, many Trandoshans have become slavers and mercenaries as they have spread out individually across the galaxy. They are extremely effective warriors, due to their keen eyesight, their scaled hides, and a remarkable ability to regenerate.

Trandoshans across the galaxy who observe the traditions of their homeworld are often profoundly spiritual, adhering to a very specific set of religious beliefs. These Trandoshans worship a female deity named the "Scorekeeper", who bestows blessings on her followers based on their victories in combat and in the "hunt". Though some Trandoshans have been observed to maintain some sense of honor, their naturally prideful inclinations are almost always more pronounced, and thus they have earned a reputation for ferocity and brutality across the galaxy.