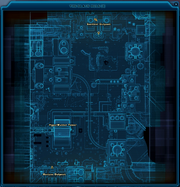 The The Black Hole is a daily mission region located on the planet Corellia.

Indisputably the most corrupt man in the Corellian government Councillor Torvix gladly signed on to join the Empire when it invaded Corellia. The councillor used his shadowy network of organized criminals and pirates to enforce order in the so called "Black Hole", a dangerous section of the Corellian Labor Valley used to process hypermatter, the key fuel for lightspeed travel.

Now both the Republic and Empire seek to purge Torvix and his forces from the Black Hole. For the Republic, it's a chance to put an end to major conflict on Corellia. And for the Empire, this is an opportunity to squeeze ever ounce of value from the war=torn world.