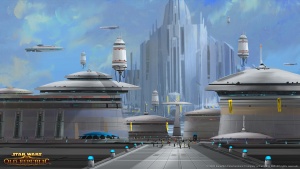 While the origin of the Sith race remains unknown, it is theorized that the fallen exiles of the Jedi Order came to their homeworld of Korriban and were treated as gods by this strong yet malleable people. Through millennia they intermarried and became a conquering force.

Defended by the Jedi Order and governed by the Galactic Senate, the Galactic Republic has been renowned for its intimidating, yet peaceful, non-conquering power. For more than twenty thousand years it has been the pinnacle of progress and prosperity. This tranquil way of life was endangered by the Dark Lord Naga Sadow when, after the iron-handed century rule of the Sith Empire by Dark Lord of the Sith Marka Ragnos died, his campaign for Galactic dominance began, this was the Great Hyperspace War in the years 5000 B.B.Y (Before Battle of Yavin, Episode IV).

Armies led by Dark Lord of the Sith Naga Sadow began their initial onslaught to destroy the Galactic Republic. The Jedi rallied to the aid of the Republic and after a few successfull battles in the core worlds, the Republic fleets followed the retreating Sith and counterattacked on Korriban. Naga Sadow had had a power struggle after the funeral of Marka Ragnos against Ludo Kresh who opposed Sadow's intentions of expanding the Empire's borders. After betraying him and leaving him for dead, he was surprised to find him alive and well. Without the Empire's support and his own fleet decimated, he fled to Yavin 4 where he entombed his warship and cocooned himself in a suspended animation chamber and left his Massassi warriors as guardians hoping someone would come to pick up the Sith teachings where he left off and bring about the Sith Golden Age that the Dark Lord Marka Ragnos had foretold. Korriban had been bombed by Republic forces and the Sith Empire was crippled, during the next 1300 years it would hide and rebuild to reemerge only when fully capable of taking its revenge on The Republic and The Jedi. The War of Exar Kun followed. 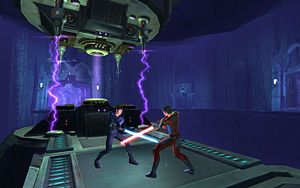 The Sith Homeworld of Korriban

1,004 years later a promising young Padawan named Exar Kun fought and nearly killed a fellow student in a disagreement. When his Master Vodo-Siosk Bass stepped in he defeated his own master. After Exar Kun traveled to Yavin 4 to unearth Naga Sadow's teachings and took command of the remnants of the Massassi, he began to spread the teachings of the Sith in Ossus, Jedi Knight Ulic Qel-Droma joined forces with him as commanded by the spirit of the long-dead Marka Ragnos who believed together they could bring about the Golden Age of the Sith. The self-proclaimed Dark Lords were eventually defeated but victory came at a terribly high cost; the Great Library and the Jedi Academy on Ossus were decimated during the fighting, forcing the Jedi to relocate to Coruscant where they built the Jedi Temple around a small mountain peak that was the center of a Force nexus.

The Mandalorian Wars occurred almost 40 years after the war of Exar Kun. They began by conquering worlds outside the Republic's territory and then launched an all-out attack on three different sectors. The war went poorly for the Republic in the early stages of the war and as the Republic cried out for the help, the Jedi Council called for caution sensing a far greater threat behind this attack. The charismatic young Jedi Revan realizing the Republic would be crushed if not supported, defied the Council's order's set out to aid the war effort, proving himself a military genius and extremely powerful in the force. Revan drove back the Mandalorians and finally defeated them in a terrible battle on Malachor V; which left the planet scorched and inhospitable. Revan had developed a desire for power and shortly after, along with his apprentice Malak, he set off to search for an ancient creation known as The Star Forge; a massive space station with the power to create machines with raw stellar material and Dark Side Force, a leftover from the eons old Rakatan civilization. During this Revan was finally corrupted and Malak followed in his footsteps.

The former heroes came back as conquerors. Many Jedi had joined Revan during the Mandalorian Wars and were corrupted by him as well as his fleet. Armed with his new ships of Rakatan design he began a steady conquering of the Republic until young Bastila Shan, a padawan with a strong affinity in the Force technique of Battle Meditation began to aid the Republic in winning a few key victories and finally setting a trap for the Dark Lord himself. Along with a small Jedi strike team she boarded Revan's flagship to capture him, Malak saw this an opportunity to take down two enemies at once and fired on his master's ship, Bastila narrowly escaped with an unconscious Revan. The Jedi Council decided not to execute Revan but to Force-scour his memories and hoped that an amnesiac Revan might show them a way to defeat Malak. From bits of memories and visions Bastila and Revan, now linked by a Force-bond, began to search for the Star Forge, eventually Revan regained his memories but did not waver from the Light. During their mission Bastila was captured by Malak, Revan re-discovered the Star Forge's location and hailed the Republic while attempting to rescue Bastila, when the Republic Fleet arrived Bastila, now turned to the Dark Side used her Battle Meditation against it; Revan entered the Star Forge to try and redeem her or whatever was necessary to stop her and give the Republic a chance, he succeeded in turning her proving himself once more and moved on to face Malak. Revan defeated his former apprentice, even with Malak having the extra power harvested from the corpses of Jedi using the Star Forge's Dark Side energies.

The Republic struggled to rebuild after the so-called Jedi Civil War, Revan left to search for the true Sith Empire which he believed were behind the Mandalorian attacks and was not heard of again. The Republic faced other threats during this period. With the Jedi Order's remaining knights publicly disbanding and the Sith fleets left without leadership, a civil war among them began destroying the academy on Korriban, a triumvirate of Sith Lords appeared to fill in the power vacuum; Darth Sion, Darth Nihilius and Darth Traya, their assassins hunted down the remaining Jedi until merely a handful remained. This new threat was vanquished by a Jedi Exile who was believed to be the last Jedi Knight. After being given an untold revelation by a dying Traya she followed Revan's path and searched for the true Sith Empire.

A time of peace followed which lasted 300 years during which the Republic rebuilt and its borders began to expand once more... but this was not meant to last. The true Sith re-emerged more powerful than ever and began a swift conquering of theRepublic, although they were more than equipped to destroy their enemies, victory did not come as quickly as the Emperor expected and in an unexpected change of strategy he made an offer of peace.

After a few decades of continuous war the Emperor offered peace, but while a committee of Jedi Masters and Senators discussed with the Sith ambassador the terms of the treaty a Sith invasion force sacked Coruscant, destroyed the Jedi Temple and held the Senate Hostage. The Jedi were forced to accept the terms offered. With the signing of this document the Republic agreed to surrender several star systems.

The Emperor has now begun to pursue mysterious goals of a different nature after the signing of the treaty. All control has been handed down to the Dark Council. New domains that had been acquired by the Sith are now maintained by the Imperial Military. A new emphasis on recruitment and training of those who are Force-sensitive has been established in order to increase the overall power of the Sith Empire.

As faith in the Jedi has been lost among citizens of the Republic, the Jedi Council has withdrawn to their homeworld, the newly rediscovered Tython. The Republic seeks to rebuild its defense by developing new squads of Special Forces. Although the new elite troopers are expected to team with the Jedi, they are now taking the lead in many instances.

These new developments are all that instills hope as the Republic struggles to gain power in the shadow of the ever growing Sith Empire.