Star Wars: The Old Republic, simply known as SWTOR or TOR, is a massively multiplayer online roleplaying game (MMORPG) set in the Old Republic era, and has been released by BioWare, a division of Electronic Arts.

The game was first officially announced in an October 30, 2007 press release. On October 21, 2008, the title of the game was revealed, in addition to a fair amount of detail about the game in a press conference. It is widely considered as the spiritual successor to Star Wars: Knights of the Old Republic (KOTOR). The game scope has been described as "essentially building [...] KOTOR 3 through KOTOR 10, and then shipping them all at once."[1]

During its presentation at E3, BioWare announced the game would be the first MMORPG to feature large-scale voice acting.

BioWare has confirmed the release date is 20 December 2011 in Europe and North America.[2] Release dates in other regions remains unconfirmed.

The story occurs in a shaky era of the Star Wars universe, among a delicate ceasefire between the Galactic Republic, factioned by the Jedi, and the recently resurfaced Sith. The plot will revolve around the conflicts that arise as a result of the reshuffling of power after the Great Galactic War. The story will also conclude the story of Revan from the original Knights of the Old Republic. 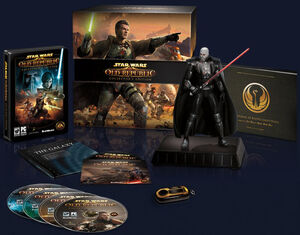 BioWare began development on The Old Republic in December 2005 at a satellite studio in Austin, Texas constructed primarily for the project. By January 7, 2007, Electronic Arts completed its acquisition of BioWare/Pandemic for $860 million, in a move motivated by hopes of expanding into the MMO genre of video games. In the following months, rumors persisted about the development of a new KOTOR video game, spurred on by leaks from within BioWare and LucasArts and the registration of "Star Wars The Old Republic" and "The Old Republic" as LucasArts trademarks.

During the E3 2008 expo, Electronic Arts executive John Riccitello confirmed that the MMO would be connected to the KOTOR series of video games. On October 7, Lucasarts and Bioware released an invitation to the press to attend an event on October 21 about "the game that has been rumored about for years." At that event, the official press release was finally published.

On Tuesday, 09/29/2009, after the SWTOR website was down for almost a day, it was announced that they would be accepting applications for game testing. The procedures include accepting the terms and agreements, basic information and a system scan of the computer you would be using to play the game.

On Friday, 07/22/2011, a press release announced that The Old Republic was available for pre-order, including special editions of the game.

The story-driven impetus of the game has been reinforced by three novels related to the game have been announced/published:

The title has already begun to receive a great deal of praise from various media outlets several months before its release. Pax East 2011 provided the public the most recent chance to go hands on with The Old Republic. Many gaming related news sources gave the project accolades for its showing at the convention. GameTrailers awarded the game both Best RPG and Best Online Game of E3 2010. IGN has also praised the story of the Jedi Consular, stating that its easy to focus more on the story instead of the mission at hand.[4]

Star Wars: The Old Republic requires a video card that has a minimum of 1GB of on-board RAM as well as support for Shader 3.0 or better. Examples include: