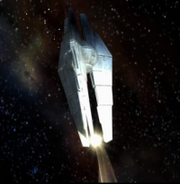 The Star Forge, while drawing energy from the nearby star.

The Star Forge was an enormous space-based droid factory, constructed by the Rakatan Infinite Empire in the Lehon system.

Created prior to 25,200 BBY, the Star Forge rapidly became a Dark Side artifact that would have later been the demise of its builders.

Thanks to its advanced technology, the Forge was able to draw energy from a nearby star and from the Force, allowing it to supply the Rakatan Empire with an almost infinite amount of troops. The Rakata, also known as "The Builders" were although naturally cruel and violent, and all the Force that was used to power the Forge came from the Dark Side.

Later, the Star Forge became an immense tool of dark side power, and that caused it to become hungry for even more power in order to keep producing troops, almost as if it was a living being. This would have later caused the corruption and the inevitable fall of the Rakatan Empire.

The Forge met its ultimate end much later: in 3,956 BBY, at the end of the Jedi Civil War, while it was being used by Darth Malak with the intent of providing the Sith with an illimitate number of troops, it was taken down by a Republic fleet aided by Bastila Shan's battle meditation.