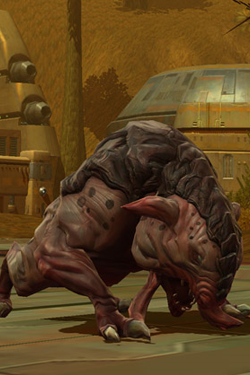 Law enforcement agencies, military groups, and criminal organizations are always on the lookout for well-trained beasts for security, and biological engineers have long endeavored to create the perfect genetic specimen. Their most infamous and controversial creation has been the salky hound.

On request from the Republic Military to develop a creature to guard installations in the Outer Rim, scientists bred various beasts from around the galaxy. They filtered for such traits as extended and naturally sharpened claws, ultra-keen senses, tremendous jaw strength, and a vicious demeanor. The salky hounds were the result of this effort.

In their first deployment, salky hounds were brutally effective, but when the military began to station them in more prominent installations, the hounds' flaw became evident: their vicious instincts were impossible to contain. Even when ordered by their masters to simply restrain, salky hounds attacked their targets with lethal force. After several dozen people were killed, the military recalled the hounds.

Since the military cancelled the contract, the biological engineering firm responsible for the salky hounds has been marketing the creatures on the black market. Several criminal and mercenary organizations have purchased the salky hounds. Rumors suggest some of these dangerous beasts have even been purchased by entities on Coruscant. This would be highly illegal as salky hounds are banned from the Core Worlds.