Four thousand years before the rise of Darth Vader, two Jedi Knights defied the Jedi Council by engaging in the brutal Mandalorian Wars. Treading a dangerous path, the two Jedi completed their fall to the dark side while pursuing the remnants of the Mandalorian armies into deep space. Adopting Sith names, Darth Revan and his apprentice, Darth Malak, began to search for the ancient Star Forge, an artifact which would help them destroy the Republic and establish their rule across the galaxy.

Darth Malak was not content being second-in-command, however, and betrayed his Master, leaving Revan for dead at the mercy of the Jedi. Desperate to stop Darth Malak’s ruthless campaign, the Jedi Council made an unconventional decision. Hoping to use Revan to defeat his former apprentice, the Council wiped Revan’s memory and re-trained him as a Jedi. Unaware of his past, Revan joined Jedi Knight Bastila Shan to trace his own dark footsteps and find a way to stop Darth Malak. 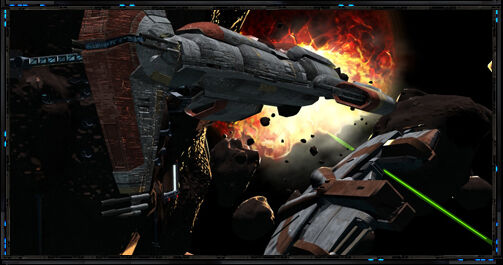 Traveling the galaxy together and with additional companions, Revan and Bastila were ultimately successful, defeating Darth Malak and destroying the Star Forge. In the process, Revan discovered the truth about his past, but never recovered his full memory. Nonetheless, he was plagued by shadowy recollections of a darkness in deep space, and after Malak was gone, Revan disappeared, never to be heard from again.

Within years of Revan’s disappearance, a new threat emerged—a triumvirate of Sith Lords who hunted down and destroyed all the Jedi in the galaxy. After successfully exterminating all but a handful of Jedi, the leader of the triumvirate, Darth Traya revealed her greater and much darker plot—to destroy the Force itself. 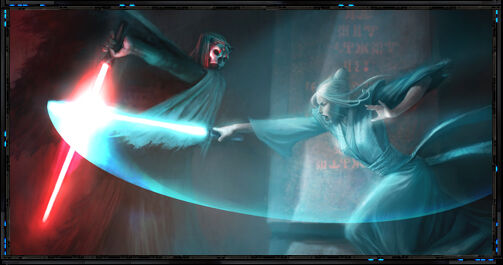 Seeking out a younger woman known as the Jedi Exile, Darth Traya began manipulating events to achieve her dark intentions. The Jedi Exile had fought at Revan’s side during the Mandalorian Wars and had subsequently lost her connection to the Force during the final battle on Malachor V. Darth Traya established a bond with the Exile, and began rekindling the Exile’s Force powers. Ultimately, her plan was to the Exile as catalyst to destroy the Force.

When Traya’s dark motives became clear to the Exile, she defeated the other two members of the Sith triumvirate, and then destroyed Darth Traya herself on the ravaged planet of Malachor V. During the process, the Exile discovered clues left for her by Revan before his disappearance. When Darth Traya was defeated, the Exile followed the clues into deep space, where she also, was never heard from again.

This is the darkness that now returns full force…