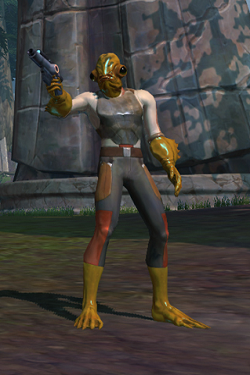 Mon Calamari are a sentient species.

The Mon Calamari are a fish-like humanoid species native of the planet Dac. They have webbed hands, large eyes, and protrusions on their chin called "barbels", which increase in number with age. Their skin color varies between individuals, although most of them are salmon-colored. They have remarkable swimming skills, but while they can descend even 30 meters below the sea level and stay underwater for long periods of time, they feel uncomfortable in pushing their innate abilities to the extreme. In fact, the young Mon Calamari could even drown.

The Mon Calamari can also swivel their eyes independently from one another, and thus focus on two different areas simultaneously. Those eyes also have an important function among the Mon Calamari: they are clear expressions of particular emotions. Staring with one eye rather than the other could mean challenge to a fight, surprise, or even love.

They also see in different wavelength than most species, making it different for one species to view visuals designed for the other and vice versa.

The Mon Calamari have an extremely developed and advanced culture. Their passion for all kinds of art, ranging from music to literature is surpassed by only few species in the galaxy. They are gentle and slow to anger, and this allows them to maintain their concentration more efficiently than many others. They are idealistic, determined, dedicated and rather daring. They are also remarkable starship designers, and known for building with an unique, complex but easily recognizable design.

Even though their nature is very peaceful, the Mon Calamari possess proud and experienced warrior clans within their society, who are ready to fight and wage war in causes that they believed in.

Originally, the Mon Calamari shared their planets with the Quarren, the Whaladons, the Moappa, and the Knowledge Bank. Unlike the other species, though, thanks to the early rudimentary form of aquaculture they developed, they were able to both farm fish and cultivate kelp. This allowed them a great technological head start over the others, especially the Quarren.

Along with the Quarren, the Mon Calamari sought to reach the stars even since the early times of their civilization. After several centuries, the Mon Calamari finally grasped the understanding of zero-gravity and starship propulsion and slowly started to explore space. In 4,166 BBY, during this very era, they met the Galactic Republic for the first time. Even though the Mon Calamari are curious and hungry for knowledge by nature, their relations with the Republic has never been solid, because both the Quarren and the Mon Calamari prefer not to trust those from off-world.