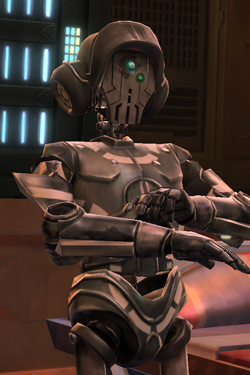 Owned privately by individuals and organizations of varying species and station across the galaxy, the M3-M1 medical droid is a mid-range, non-military issue model mass-produced by the starfront health corporation on Nar Shaddaa. Several competing manufacturers offer similar droids, but the M3-M1 is the most popular model on the market based on its ability to operate in varied environments and its renowned reliability.

The M3-M1's databanks cover more than five thousand species, and it is capable of successfully diagnosing and treating more than two million injuries and ailments. The droid's programming is adaptable to almost any situation, but it is specially designed for application in emergency facilities. Safeguarded against developing any emotional programming, M3-M1s are capable of dispensing unbiased medical advice and tending to even the most horrific wounds and diseases without flinching. The M3 line also offers many optional features, including specialized surgical equipment, expanded databanks for lesser-known conditions, and even a soothing bedside manner not found in most droids at its price range. It should be noted that the M3-M1 has also proven to have the lowest incidence of hardware malfunction in droids of its class.