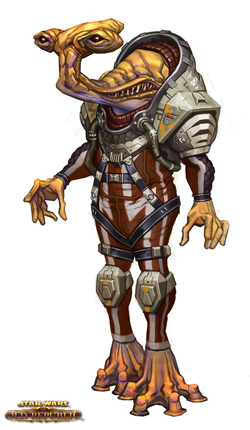 Ithorians are a sentient species.

Ithorians are commonly called "Hammerheads" throughout the galaxy because of their most prominent feature: a long, curving neck ending in a t-shaped dome of a head. These tall, gentle herbivores hail from the planet Ithor.

From the Expanded Universe[edit | edit source]

Ithorians speak Basic, albeit with a peculiar twist. On the sides of their curling necks, Ithorians have two mouths. This creates a disconcerting stereo effect when they speak Basic, and a difficult yet interesting sounding native language.

Ithorians worship the "Mother Jungle" a spiritual entity of Ithor embodying the lush, tropical ecology of their world. Most Ithorians never set foot on their own planet, instead they lived in floating cities above their world. Only three of their continents had been developed, the other two never having been touched by Ithorian hands.

Ithorians are gentle and peace-loving, devoting much time to contemplating their ecology, and respecting all living things. Ithorians are curious and gregarious, and many have found their way to the stars. Their floating "herd" cities also have space-worthy counterparts, traveling the space-lanes like huge caravans. Each Ithorian herd-ship has a complex life-support system that replicates the environment of Ithor, complete with jungles, wildlife, and even weather patterns.

The people of Ithor practice a communal form of government. Each herd is autonomous and self-supporting. Once every Ithorian season (about five standard years), the herds gather for "the Meet." A grand site above the surface of their green world, the herd ships would join each other in a festival and regal ceremony.

Behind the Scenes[edit | edit source]

The Ithorian design was developed by concept artist Ron Cobb and built by Jon Berg for the cantina reshoots done late in the production of Star Wars. A new version of the fan-favorite was crafted by Nick Dudman's crew for Episode I, and was reused in Episode II.