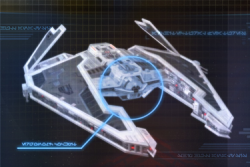 The Fury is a starship available to players of the Sith Inquisitor and Sith Warrior classes.

Featuring an advanced hyperdrive and state-of-the-art sub-light engines, the Fury is the most versatile starship in the Imperial fleet. Though initially designed for high-priority military missions, the Fury has become a favorite among Sith Lords and the latest models have been engineered accordingly. The Fury's angular design combines the maneuverability of smaller Imperial fighters like the Interceptor with impressive armament that rivals some of the Empire's larger military vessels. The Fury also features a newly designed set of 'strike foils' that remain down for travel but can be expanded in short range combat to maximize the ship's agility and range of firepower. On the interior, adjustments have been made to match to the luxury and aesthetics demanded by the Sith. No expenses have been spared.