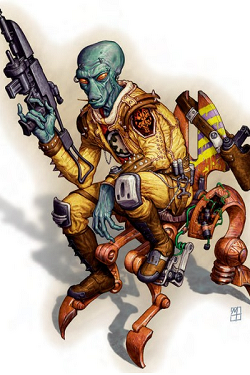 Duros are a sentient species.

The Duros are a species hailing from the planet Duro. They are humanoids with a rather smooth blue-green skin, lipless and noseless faces and red eyes, and they preserve the sense of smell thanks to particular glands under their eyes. Also, both the female and male Duros are completely bald.

The Duros are most notably known for their extraordinary space travelling skills. Many of them are, in fact, natural pilots, explorers and adventurers. They were also one of the first civilizations -if not the first- to develop hyperdrive spacecraft, and their trade routes are among the oldest hyperspace routes still in use.

The Duros are a very old species native of the planet Duro.

During the construction of the Star Forge, in 30,000 BBY, the Duros were conquered and enslaved by the Rakata of the Infinite Empire in order to gain additional workforce. The Duros tolerated their masters, as this slowly made them extremely knowledgeable in inter-stellar technology and satisfied their natural curiosity. In 25,200 BBY, though, a plague that caused many victims among the Rakata made the Duros slaves rebel and ultimately, the Rakatan masters were overthrown. The Duros then established a hereditary monarchy and after the fall of the Empire, they reverse-engineered all the engines left by the Rakata and built the first hyperspace cannon.

Early on the Duros became interested in exploration and started exploring the galaxy outside their native planet, but in 3,962 BBY, Duro was laid to waste during the Mandalorian Wars.