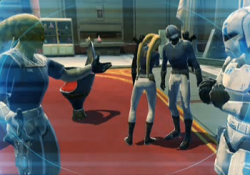 Ruled by Corruption is a codex entry found within the Lore section of a player's codex once it has been unlocked. It can be earned on the planet Ord Mantell and provides a brief background on the reasons why the separatists were founded.

The Ruled by Corruption codex entry is unlocked by players belong to the Galactic Republic faction while progressing through the objectives of the mission Republic Roulette.