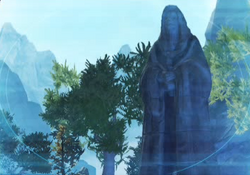 Rediscovering Tython is a codex entry located within the lore section of a player's codex once it has been unlocked. It can be earned on the planet Tython, and provides a brief synopsis of the planet's rediscovery and later colonization by the Jedi Order.

Rediscovering Tython is a codex entry that can be unlocked by examining the plaque at the base of the Ancient Jedi Statue, a Lore Object located in the Gnarls. The Gnarls is a valley on the planet Tython used by the Jedi Order as a training ground.