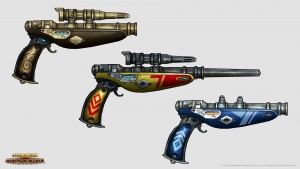 The blaster has been the favorite weapon of any soldier for generations. It's easy handling and good power make it a reliable tool for long range combat. However, it's not that effective at close range as a melee weapon due to it's maneuverability (heavier). If adequately modded, it can break through personal shields opposing forces might be carrying, fairly fast.

A blaster fires concentrated energy that when stopped by an object (body, wall or common objects) it expands through it's surface discharging that energy. That way, it can inflict maximum damage without dissipation of the energy. The energy is initially stored on a power cell and is concentrated on a chamber before the barrel. That energy can be of various types.

Nothing is known about which blasters will be in game, although Arkanian and Mandalorian design blasters have high chance of appearing. The is also a high chance that any blaster weapon type can be modified like the type of energy or firing rate at the cost of some attributes.