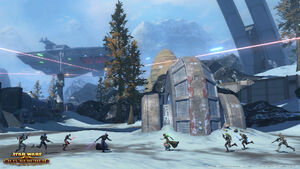 The planet of Alderaan serves as the host to the first Warzone revealed to be available to players with the launch of The Old Republic. The game mode for The Civil War most closely resembles a "capture and defend" rule set, with some notable departures. Unlike the recently revealed Huttball Warzone, no cheering crowds await those doing battle on the Alderaan fields:

The Civil War features an 8v8 struggle between the Republic and the Empire, in which they will be fighting over three control points each with a large, powerful cannon. While a control point is held its cannon will shoot at the opposing faction's ship, from which the enemy players automatically spawn after being defeated. Controlling turrets in this game mode also enables more efficient flight paths for the controlling teams re-spawning player's ride back into the action. The game ends when one faction's ship has been destroyed.

The developers have explicitally stated that they are not planning on implementing a system that allows the player to heal their damaged ship, but this, as almost everything regarding this Warzone, is still being tested, and thus potentially subject to changes.