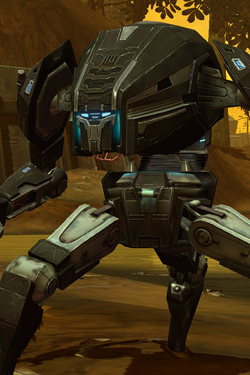 The Hutt Crime Cartel commissioned the initial line of AR models with the goal of using them for security, but they earned the nickname "Backbreakers" because they're also commonly used as muscle when gangsters seek to "collect" on unpaid debts. Though the AR-34 Enforcer droids are based on similar mechanical architecture to military droids, they are optimized for a completely different environment.

The criminal underbellies of the galaxy's city-worlds are where the AR-34's excel. In place of the massive armament attached to standard military models, the AR line comes equipped with high-speed short-range blasters. Combined with their immense limb strength, this allows them to bust down reinforced doors and lay waste to an entire room in mere seconds. Though the Enforcer's blasters are deadly, their greatest weapon is their cortosis-grip gauntlets which can pulverize most opponents in a single blow.

Additionally, the AR-34 line is engineered for enhanced mobility, faster acceleration and increased flexibility for pursuing their enemies if necessary. The AR-34 Enforcer's sensors are optimized for tracking quarry through industrial and mechanical environments.